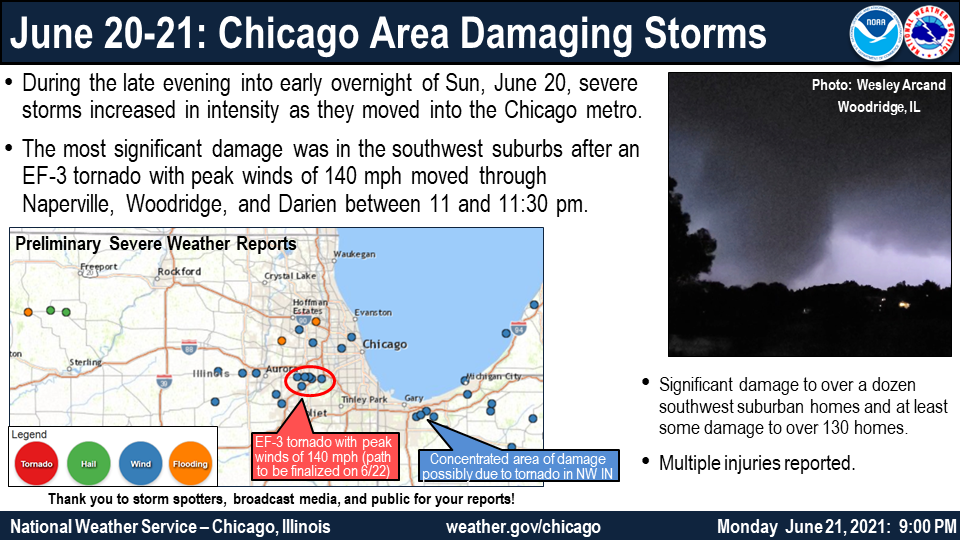 4:15 PM Update: Our damage survey team found the EF-3 tornado that impacted Naperville, Woodridge, Darien, and Willow Springs had a track approximately 16.1 miles long and max width of ~1/3 of a mile. 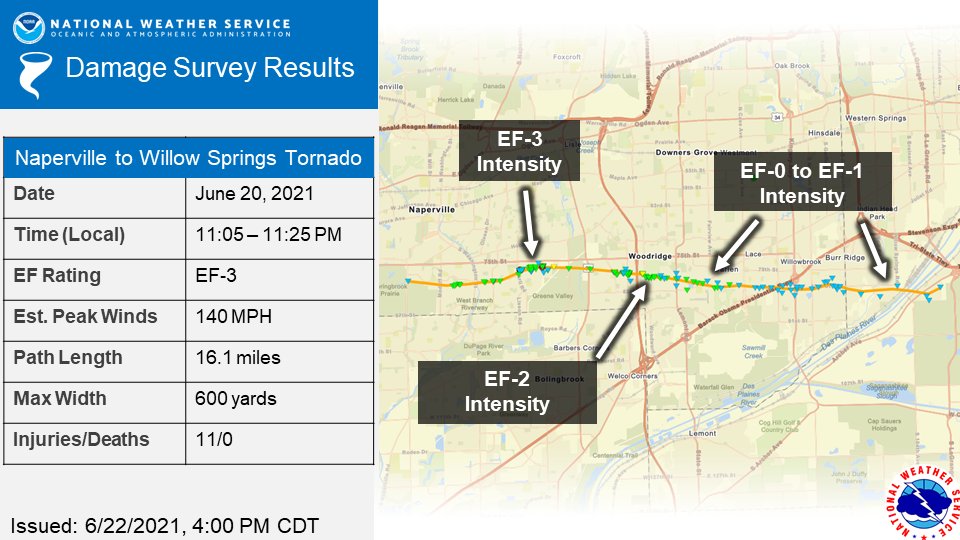 An NWS Damage Survey team continues to finalize survey data for a tornado path that started in Naperville and ended in Willow Springs, Illinois, during the evening of June 20, 2021. The majority of damage along the path is consistent with wind speeds corresponding to the EF-1 to EF-2 ratings on the Enhanced Fujita Scale.

However, at least one pocket of damage consistent with an EF-3 rating with peak winds speeds near 140 mph was found near Princeton Circle in Naperville. This rating is preliminary.

Additional information about the tornado will be released on June 22, 2021.

The approximate starting location of the tornado was near Plainfield-Naperville Road and Sheppey Court at about 11:05 PM. Sporadic wind damage was found both west and east of this point before the path became more concentrated and continuous east of Modaff Road. The tornado gradually intensified as it tracked east and especially east of Naper Boulevard where damage to homes became common. The tornado reached peak intensity in the area around Princeton Circle in Naperville where a house completely collapsed and multiple nearby homes also sustained considerable damage to their roof and walls. From that location the tornado continued east across the Greene Valley Forest Preserve into Woodridge. Another area of concentrated damage occurred between Woodridge Drive and Basswood Lane in Woodridge where numerous homes lost several walls and apartment buildings lost large portions of roofing material. The tornado continued east-southeastward producing primarily tree damage from Lemont Road into southern Darien, across Interstate 55, and southern Burr Ridge. The damage path became narrow as it crossed the Des Plaines river into Willow Springs, after which point the tornado dissipated near Buffalo Woods at approximately 11:25 PM CDT. In total, around 230 homes sustained damage from the tornado with the most significant damage in Naperville and Woodridge, and at least 11 people required medical treatment.

An NWS Damage Survey found sporadic tree damage consistent with straight-line winds in the vicinity of Meadow Lane between 143rd Street and Lockport Street eastward to Illinois Route 59 in Plainfield. A concentrated swath of significant tree damage consistent with an EF-0 tornado with peak wind speeds of 85 mph was evident beginning near the intersection of Illinois Routes 59 and 126 just north of downtown Plainfield and extending eastward through adjacent neighborhoods. The path of primarily tree damage continued east-southeast through the Lake Renwick Preserve, crossing Interstate 55 just south of Lockport Street. A path of sporadic tree damage was found in the fieldstone neighborhood in Romeoville around Helen Drive, with the damage path ending over Mistwood Golf Club. Areas just south of the tornado track experienced straight-line wind damage, as well.

Preparedness: While there was a fairly fast-moving tornado in the densely populated southwest Chicago suburbs and after dark, the number of serious injuries was relatively small. This, at least in part, had to do with preparedness and people taking action when the warnings were issued. It is a reminder too on the importance of having multiple means to receive a warning. For more on severe weather preparedness, see here. 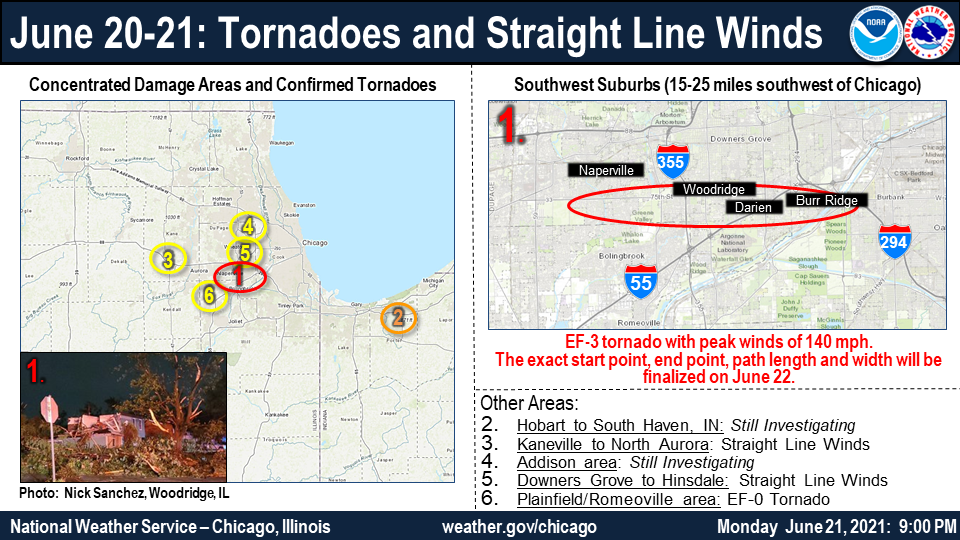 previousOfficials Release Information On The Structure Fire From Earlier Today
nextSources are reporting a victim stabbed in the back in Rockford.

Extrication Needed At An Accident Scene, AVOID The Area

Mayor McNamara: ” Since the onset of the pandemic in March 2020, we know our crime numbers have moved in the wrong direction “

Click Here To Read More »Mayor McNamara: ” Since the onset of the pandemic in March 2020, we know our crime numbers have moved in the wrong direction “

Warrant Wednesday: Police Are Searching For These Wanted Individuals

AcciDent WIth Injuries at a Busy RoCKford Intersection