WIFR: The following sequence of events of the first officer involved shooting is based almost entirely on audio and video evidence taken from deputies body worn cameras, according to Hanley.

At approximately 11:30 a.m. on Saturday, April 10, a Winnebago County Sheriff’s Deputy were sent to a call from a victim of domestic violence. The deputy spoke with the victim inside of the Casey’s gas station near the corner of Mulford and Harrison. The victim told the deputy that her and her husband, Faustin Guetigo, got into an argument at their apartment. She stated that Guetigo did not want her son, who has special needs, to live in their apartment.

At approximately 5:45 p.m., deputies were sent to 2191 Bellwort Dr. in response to a call of domestic disturbance. Guetigo’s wife had again called 911. The first deputy who arrived made contact with Guetigo in the street outside of the apartment. He asked Guetigo to put his hands behind his back because he was under arrest. Guetigo then began moving quickly back towards his apartment. The deputy requested that Guetigo stay outside and not go into his apartment.

Guetigo went inside his apartment, according to Hanley.

Additional deputies arrived and the decision was made to enter the apartment to arrest Guetigo. Deputies got a key to the side door of the apartment. One deputy entered the home and went to the left into the living room and kitchen area. That deputy had his taser out of its holster.

A second deputy, Sergeant Broullard, entered the door, into a small foyer, with his firearm out of its holster. The firearm was in his left hand and held at his chest. Broullard opened the basement door immediately in front of him. Guetigo is seen toward the bottom of the basement stairs. Guetigo was holding a silver metal pipe, according to Hanley.

Deputy Eiten, outside of the apartment, fired his firearm into the apartment. This shot shattered the glass of the door.

Guetigo was given emergency care for his wounds by deputies. An ambulance was called and Guetigo was transported to OSF St. Anthony Hospital where he was later pronounced dead, according to Hanley.

It appears from the video that Broullard was knocked unconscious as a result of being struck with the pipe by Guetigo. Broullard was transported to OSF St. Anthony Hospital, was treated, and later released, according to Hanley.

Thank you ISP for the information!

WINNEBAGO BOONE COUNTY INTEGRITY TASK FORCE INVESTIGATE OFFICER INVOLVED SHOOTING IN ROCKFORD
Rockford, IL – Winnebago-Boone County Integrity Task Force (WBCITF) was requested by the Winnebago County Sheriff’s Department (WCSD) to assist with an officer-involved shooting involving a deputy from the WCSD. The incident occurred on April 10, 2021, at approximately 5:45 P.M. in the 2100 block of Bellwort Drive, Rockford, IL while the deputy was responding to a domestic disturbance. The domestic situation escalated to an officer involved shooting.

The suspect was transported to a local hospital where he succumbed to his injuries.

The WCSD deputy was transported to a local hospital with non-life-threatening injuries.
The name of the suspect is being withheld pending family notification.

The WBCITF is leading this open and on-going investigation.

No additional information will be released at this time by WBCITF.

The Winnebago-Boone County Integrity Task Force is handling the investigation for an incident earlier tonight on Bellwort Drive. 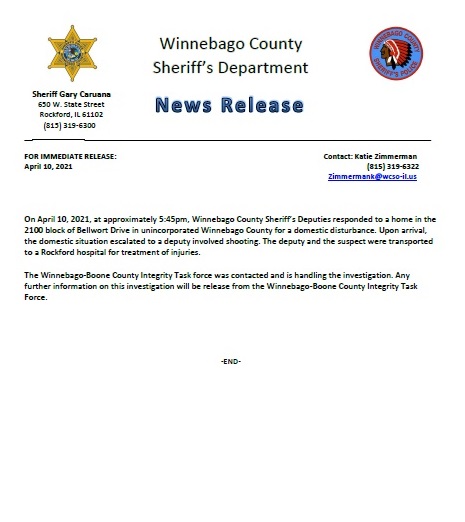 Caught On Camera: An Alleged Thief Stealing From a Yard in Winnebago County

Click Here To Read More »Caught On Camera: An Alleged Thief Stealing From a Yard in Winnebago County

Accident With Injuries in Loves Park

Fire At A Residence in Machesney Park

Sources are reporting a structure fire in Winnebago County.