Tune into Northern Illinois SKYWARN on 147.195

A particularly dangerous situation has developed with severe storms moving into northern Illinois / Indiana between 1 & 7 PM CDT; strong wind gusts up to 100 MPH are possible, along with large hail and a possible tornado or two. Please prepare accordingly by securing outside items like lawn furniture or trashcans! 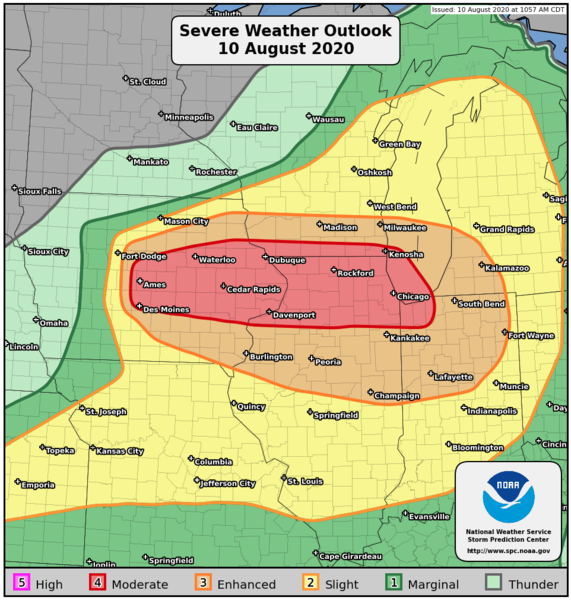 National Weather Service has put us into a moderate chance for severe weather today.

Widespread damaging with downed trees and power lines are likely this afternoon and evening. The worst may come through the Chicago metro around rush hour. We are in rare a category 4/5 risk for severe weather. Have multiple ways to receive warnings!

SUMMARY…Widespread damaging winds, some potentially significant
(75+ mph), will become increasingly likely as a line of storms moves
quickly eastward this afternoon. A Severe Thunderstorm Watch will be
needed to address this threat, and an upgrade to Moderate Risk (for
significant severe/damaging winds) will be issued with the upcoming
1630Z update to the Day 1 Convective Outlook.

DISCUSSION…A compact MCS moving into central IA as of 1540Z has
recently produced numerous severe/damaging wind gusts. Recent radar
trends suggest this system has already become very well organized,
with the development of an 80-100+ kt rear-inflow jet only a couple
thousand feet off the surface per KDMX velocity data. The airmass
downstream of this MCS into eastern IA, southern WI, and
northern/central IL is already quite unstable, with MLCAPE of
2000-2500 J/kg present per 15Z mesoanalysis estimates. Additional
diurnal heating of this airmass is expected to yield very strong to
potentially extreme instability by this afternoon, with MLCAPE
potentially reaching the 3500-5500 J/kg range by peak heating.
Recent VWPs from the KDMX radar show sufficient mid-level flow
(around 30-35 kt) to support the continued intensity of the ongoing
MCS.

Additional storms have recently formed across parts of north-central
into northeastern IA along a weak cold front. Current expectations
are for the MCS in central IA to eventually merge with the new
development in north-central/northeastern IA. Result of this will
likely be a large, very well organized bow echo producing widespread
severe and damaging wind gusts across parts of eastern IA into
southern WI, and northern/central IL. The forecast combination of
very strong to extreme instability with adequate deep-layer shear
downstream of the ongoing MCS strongly suggests that a swath of
potentially significant severe wind gusts of 75+ mph is becoming
increasingly likely this afternoon across parts of these areas. A
new Severe Thunderstorm Watch will be needed downstream of the
current watch in central IA within the next hour or two. An upgrade
to Moderate Risk for numerous significant severe/damaging wind gusts
will be issued with the 1630Z update of the Day 1 Convective
Outlook.

Add photo   Please take a second and hit that…

We want to hear your local paranormal experiences!   Email…

Rockford Scanner: RPD Releases Info. On 2 Vehicles Shooting At Each Other Of The West Side

Read More »Rockford Scanner: RPD Releases Info. On 2 Vehicles Shooting At Each Other Of The West Side