Rockford Scanner™: Several Officers Working A Scene On The East Side

T-MOBIL LATEST: The suspect, 37-year-old Joe Harris, was charged with Attempted Armed Robbery and UUW by a Felon 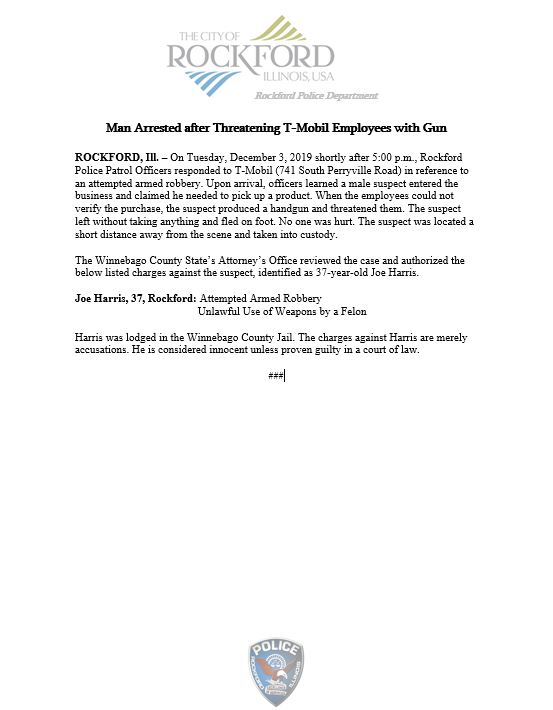 T-MOBIL UPDATE: The suspect is in custody. Further information will be released when available.

RPD on scene of an attempted armed robbery at T-Mobil (741 S. Perryville). Suspect threatened employees with a gun and then left empty-handed. No one hurt. Incident still under investigation. More info to follow when available.

Sources are reporting a scene on the East side.

Numerous officers are working a scene near the (Chipotle, panera, t-mobile, etc…)   700 block of S Perryville.

We have been told this was a robbery with possible injuries.

As you know the police are encrypted and have not confirmed or released and information.

If they do we will update this.

Rockford Scanner: Stabbing Victim On The West Side

Sources are reporting a stabbing in Rockford. …

Read More »Rockford Scanner: Stabbing Victim On The West Side

Sources are reporting a shooting victim on…

Sources are reporting a violent scene in…

Rockford Scanner: Man Shoots At A Woman, Then Has Standoff With Police

Read More »Rockford Scanner: Man Shoots At A Woman, Then Has Standoff With Police

If you have information…

Rockford Scanner: Police Release Information On A Recent Shooting On The West Side

If you have information…

Read More »Rockford Scanner: Police Release Information On A Recent Shooting On The West Side