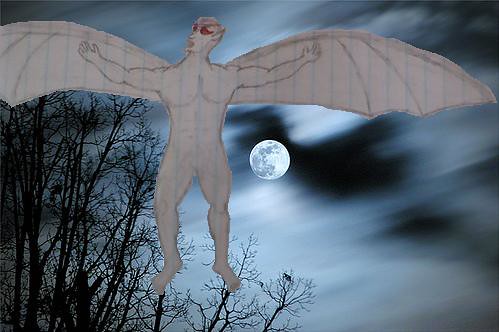 We ask that you please keep an open mind when reading our website.

I began to read about this mysterious creature that was being called the “Chicago Mothman”
It did not take long to notice that there were numerous reports from eyewitnesses.  As I kept reading, I came across a sighting in the Rockford area. So I decided to do a search for ” Rockford Chicago Mothman”  and when the search results popped up,  my jaw dropped…

After I was done reading the reports, I began to think to myself “What may be flying around our local skies, that we may not be aware of”  and I also thought to myself “I wonder how many more witnesses that may be out there, that have yet to speak up about their experiences”

If you have saw what you think may have been a large creature in our skies, let us know!  It doe not have to be a recent report. We want to hear about what you have saw, and we will keep you anonymous!”

We are going to post a few reports from eyewitnesses of the alleged local sightings of the  Chicago Mothman.
You can read the full details of the eyewitnesses reports at https://www.phantomsandmonsters.com/

One eyewitness reported: “I saw an all black 7ft in length man with huge bat-like wings flying across the park that borders along my backyard. It then descended to approximately 5 to 6 ft above ground. It pulled or folded its wings in slightly and then glided along the paved path that runs through the park”

Another eyewitness said: “Bruce St. and Woodlawn Ave. in Rockford, IL.  The being suddenly produced a large set of wings and took flight, gliding over the back gate of the property. It then disappeared into the trees and foliage”

Another witness is reporting: “I could see the corn shaking to the right of me as the headlights hit it. We both stopped talking as we watched the corn. I thought it was probably deer about to sprint out onto the road, so I slowed down to a crawl. The corn was now shaking violently. We’re staring at the corn waiting for the deer to jump out.

Then all of a sudden, the corn literally parts open just to the right of us. This ‘thing’ steps out. It was the size of a large man and all black. As it walked out of the corn it was well illuminated by my headlights. It leaped and opened these huge set of wings, and instantly went airborne.”

Another eyewitness lived on Willard ave and said:
“noticed a dark gray winged humanoid slowly flying near a large tree; it had small cat-like ears and intense red eyes. There were no other facial features visible. It was quite muscular throughout the body and had 2 defined legs, and had arms that attached to the wings. She stated that the winged humanoid was 7ft in length with a wide wing span. The wings were like those of a bat with a leather-like membrane.”

Another eyewitness report was on Spring Creek: “observed a winged shape approaching her head-on. By the time this flying anomaly got near her, it swooped up and over the car. JL states that the winged being was humanoid in shape with two leg-like structures trailing below it. The wing span was so wide that it literally blocked out all the street lights. She estimates that it was 6 ft in height, black in color and had large wings approximately 12 ft in total width”

There are several reports from eyewitnesses that  are reporting what they believed was the Chicago Mothman in the skies over Winnebago County.

If you think you may have saw something similar, let us know!
RockfordScanner@Gmail.com

Chicago Mothman Spotted in our area

Sources are reporting a shooting incident.  It happened just…

Good Job RPD: A Man Is Now Behind Bars, For Allegedly Killing A Person in 2021 in Rockford

Click Here To Read More »Good Job RPD: A Man Is Now Behind Bars, For Allegedly Killing A Person in 2021 in Rockford

Rockford Scanner™: Another Robbery in Rockford

Rockford Scanner™: Shooting Incident on The West Side

Click Here To Read More »Rockford Scanner™: Shooting Incident on The West Side