(CNN)President Donald Trump wielded his powers of clemency Tuesday for convicted white-collar criminals and the former Illinois governor accused of attempting to sell a US senate seat.

The wave of pardons and commutations, some of which Trump has been considering for years, came amid a post-impeachment flurry of presidential prerogative, from ridding his team of aides he deemed disloyal to flagrantly inserting himself into Justice Department matters.
Trump announced midday he had commuted the prison sentence of former Illinois Gov. Rod Blagojevich, a Democrat who has served eight years of a 14-year sentence for the pay-for-play charges. Trump had been weighing the move since at least since 2018.
“He served eight years in jail, a long time. He seems like a very nice person, don’t know him,” Trump told reporters at Joint Base Andrews, suggesting the television appeals of Blagojevich’s wife Patti helped cement his decision.
Trump also announced pardons for former New York police commissioner Bernie Kerik, convicted of tax fraud and lying to officials; Mike Milken, an investment banker known as the “Junk Bond King” who was convicted of felony charges that included securities fraud and conspiracy; and Eddie DeBartolo Jr., the former owner of the San Francisco 49ers who pleaded guilty in 1998 to failing to report a felony in a bribery case.
In total, Trump granted clemency to 11 convicted criminals on Tuesday.
Trump pardons former New York police commissioner Bernie Kerik
The moves furthered the impression of a President unbound after the Senate acquitted him following impeachment charges he abused his power. Aides had worked to convince Trump against reducing Blagojevich’s sentence, believing it would play poorly. And Republican members of Congress lobbied Trump to drop the idea.
But aides say Trump feels newly emboldened after the Senate acquittal, and the steps he announced on Tuesday were long in the works.
Trump publicly hinted he would use his clemency powers for Blagojevich, a Democrat, in August. But he faced sharp blowback from some conservative members of Congress, including from Illinois, as well as from some White House advisers who said it would undercut a message of draining Washington’s swamp.
On Tuesday, Trump linked Blagojevich’s prosecution to a longtime foe, former FBI Director James Comey, a close friend of former US attorney in Illinois Patrick Fitzgerald, who led the prosecution against Blagojevich.
“It was a prosecution by the same people — Comey, Fitzpatrick — the same group,” Trump said, misstating the Illinois US attorney’s surname.
Trump has raged over the past week at what he says are prosecutors run amok, including in the case involving his friend Roger Stone, who is due to be sentenced this week.
After Trump bemoaned a sentencing recommendation for Stone on Twitter, the Justice Department revised its suggestion, leading to accusations Trump was interfering in the department’s business. Even Attorney General Bill Barr said in an interview Trump should avoid tweeting about his agency’s investigations.
Trump on Tuesday called Barr “a man with incredible integrity.” But he nonetheless insisted he had a right to involve himself in Justice Department matters.
“I’m allowed to be totally involved,” Trump said. “I’m actually, I guess, the chief law enforcement officer of the country. But I’ve chosen not to be involved.”
And though Trump granted clemency to a total of 11 convicted criminals on Tuesday, he said he wasn’t thinking about doing the same for Stone.
“I haven’t given it any thought,” Trump said, though sources have said Trump is weighing taking such a step. 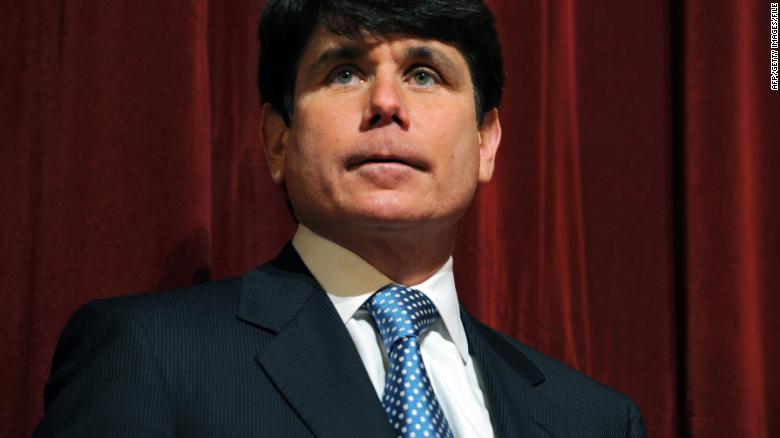 Trump appears to back off plans to commute Blagojevich’s sentence after pushback from Illinois Republicans
Internally, the effort to pardon or commute Blagojevich’s sentence was championed by Jared Kushner, who has led the administration’s criminal justice reform efforts. Blagojevich appeared on Trump’s boardroom reality show NBC’s “Celebrity Apprentice” in 2010 but was fired by the future president before the final round.
Trump said Tuesday he wanted Blagojevich to be able to see his family again after serving eight years in prison, calling the 14-year sentence for charges related to selling former President Barack Obama’s Senate seat “ridiculous.”
When Trump seemed close to announcing a commutation over the summer, several Republican lawmakers aired their concerns in phone calls to acting White House chief of staff Mick Mulvaney and White House counsel Pat Cipollone. Two Republicans, Reps. Darin LaHood and Mike Bost, directly appealed to Trump not to use his clemency powers for Blagojevich.
By August, the White House had already been working for several months on vetting Blagojevich’s case. The President first raised it in 2018.
Trump has suggested in his public comments about the case that he believes Blagojevich was simply doing what all politicians do.
“I would think that there have been many politicians — I’m not one of them, by the way — that have said a lot worse over the telephone,” he said last year.
Kerik, who once served three years in federal prison for charges including tax fraud and lying to officials, was nominated as homeland security secretary by President George W. Bush but withdrew from consideration due to potential tax violations.
Kerik, a former business partner of Trump ally and former New York Mayor Rudy Giuliani, helped with the case of Navy SEAL chief Edward “Eddie” Gallagher, who was convicted of bringing discredit to the armed services after posing next to a dead ISIS fighter’s body, which is against regulations. He was then demoted in rank — a decision Trump reversed in a move that angered military officials.
Milken rose to prominence on Wall Street in the 1980s as the head of the high-yield bond department, also known as junk bonds, at the now defunct firm Drexel Burnham Lambert.
But Milken got tied up in an insider trading scheme and eventually pleaded guilty to several counts of securities violations tied to a scandal with former stock trader Ivan Boesky.

This story has been updated to include additional reporting.

previousDash Camera Footage Of A Reckless Driver in Machesney Park
nextPolice release information on the shooting over the weekend, 2 juveniles that were shot in Rockford

Fatal Accident: Vehicle Hits A Tree And catches On Fire, Driver Passes Away