Rockford Scanner™: Some Information About The SAFE-T Act 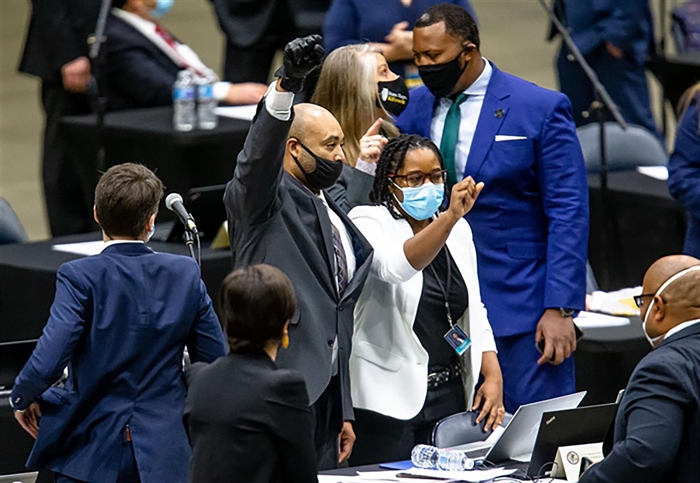 Rep. Justin Slaughter, D-Chicago, is pictured on the floor of the Bank of Springfield Center which served as the state House chamber in January 2021 amid the passage of the SAFE-T Act criminal justice reform. (Credit: Justin Fowler, Springfield State Journal-Register)

We provide our fans with informative entertainment. We post our opinions on different topics, on what possibly happened. Based on the information that has been provided to us. We highly recommend that you do your own research via other resources and forming your own opinions.  Our primary goal for this blog, is to provide informative entertainment.  We want to thank our fans who provide us with their information and content, Thank You! If you have information, RockfordScanner@gmail.com

Capitolnewsillinois.com –
The Safety, Accountability, Fairness and Equity-Today Act, known as the SAFE-T Act,
passed with the backing of the Illinois Legislative Black Caucus in the early hours of Jan. 13, 2021.

SAFE-T Act: Policing Highlights
USE OF FORCE
In the area of use of force, the Act:

Offers new standards for when police use force.
Requires officers to provide aid after using force.[2]
Requires officers to intervene if other officers use unauthorized or excessive force.[3]
Prohibits police access to any military equipment surplus program or purchasing specific types of equipment.[4] [5]
Requires publishing of any purchase, request, or receipt of equipment through any military purchasing program.[6]
Expands use of, and changes guidelines and requirements for, body worn cameras and who may access, review, or delete footage.[7]
Expands officer training on topics including crisis intervention, de-escalation, use of force, high-risk traffic stops, implicit bias, racial and ethnic sensitivity training, and emergency response.[8]
Mandates use of force reporting to FBI National Use of Force Database.[9]
Requires reporting of deaths in police custody and due to use of force.[10]*

Creates a statewide decertification process for officers.[11]
Allows the attorney general to investigate, initiate civil lawsuits, and enforce settlements against police agencies that have a pattern of depriving individuals of their rights.[12]
Creates stricter body camera regulations and a Class 3 felony for clear and willful attempts to obstruct justice.[13]
Allows for investigation of anonymous complaints against officers.[14]
Bans the destruction of police misconduct records.[15]
Allows complaint filings against police officers without sworn affidavits or other legal documentation.[16]
Removes the requirements that officers under investigation must be informed of complainants’ names or of the officer in charge of the investigation.[17]

Prohibits local governments from retaliating against employees who report improper government actions.[18]
Expands notification of police misconduct to the Illinois State Training and Standards Board.[19]
Makes data on misconduct more accessible.[20]
Requires a publicly available database for any police misconduct that results in decertification.[21]

OTHER POLICE PROVISIONS
In other police provisions, the Act:

Adds reporting of officer dispatch to mental health crises or incidents.[29]
Makes residency requirements a subject of collective bargaining for cities with populations over 100,000.[30]
Requires officers to issue a citation rather than arrest for certain low level offenses.[31]
Provides for confidential mental health screening and counseling for officers.[32]
Expands crime statistics reporting to monthly.[33]
Provides people in custody with up to three phone calls within three hours.[34]
Allows for medical treatment for people in custody without unreasonable delay.[35]
Amends police pre-arrest diversion/deflection programs to allow for collaboration with other first responders and community partners.[36] *
SAFE-T Act: Pretrial Highlights
In the pretrial area, the ACT:

Abolishes cash bail.[37]
Prevents the results of a risk assessment from being the sole basis for a detention decision and informs the accused person of the tool.[38]
Establishes a Pretrial Practices Data Oversight Board to oversee data collection and analysis.[39]*
Establishes the Domestic Violence Pretrial Practices Working Group.[40]*
Adds notification of pretrial hearing to crime victims.[41]
Changes the offense class for violations of conditions of pretrial release.[42]
Changes pretrial release procedures, including release on own recognizance, warrant alternatives, and conditions of release, including electric monitoring and home confinement revocation, modification, and sanctions.[43]
May revoke pretrial release under certain circumstances.[44]
SAFE-T Act: Correctional Highlights
In the area of corrections, the ACT:

Requires the Illinois Department of Corrections to report prison inmates’ most recent known address prior to incarceration to the State Board of Elections to use in redistricting legislative districts.[45]
Requires reporting of deaths in custody.[46]*
Enhances sentencing credits for incarcerated individuals.[47]
Amends court options in sentencing decisions to prison.[48]
Alters mandatory supervised release terms.[49]
Amends definition of habitual criminal and first-degree murder charge.[50]
Clarifies sentence credit for time in custody for home detention.[51] [52]
Allow for certain movements for those on electronic monitoring and home detention.[53] [54]
Increases eligibility for individuals who were sentenced for certain drug offenses to enter diversion or probation programs.[55]
Requires corrections staff training related to pregnant women and provides education and assistance with care of children and newborn infants.[56]
In addition to criminal justice reforms, the Act has provisions regarding crime victims.
The Act changes crime victim compensation by:

Expanding the definition of crime victims for compensation purposes.
Increasing the time period for victim compensation.
Allowing the attorney general and the court of claims to accept a compensation claim.
Expanding compensation to sexual assault survivors.
Prohibiting barring compensation based on criminal history.
Increasing monetary support for loss of future earnings and for funeral costs.
In addition, the Act states the state’s attorney’s office shall notify crime victims of the defendant’s initial pretrial hearing and allow them an opportunity to obtain an order of protection at the hearing.

Finally, the Act reduces restrictions on driver’s license suspension, cancelation, and prohibition of renewal based on failure to pay certain fines or other requirements

CLAIM: Anyone charged with a “non-detainable offense” will be released immediately after arrest.
See graphic below, which is making the rounds on social media.

FACT: The SAFE-T Act does not create any “non-detainable offenses.” Illinois law has no such thing.

Certain crimes, including forcible felonies, stalking, and domestic abuse, guarantee the revocation of pretrial release; meaning, they will not be released after arrest. This is outlined in the act’s section 110-6.1.a.

Keep in mind: pretrial release is just that–release before a person’s trial.
An alleged criminal is not free forever.
Once they are tried, they are either found guilty and sentenced or found innocent and released.

FACT: The act does abolish the money bail system beginning Jan. 1, 2023. According to the U.S. Commission on Civil Rights, the cash bail system disproportionately impacts Black and brown communities and other underrepresented or impoverished groups.

FACT: Convicted criminals currently in jail will not be released. Someone who is arrested after Jan. 1 may be released prior to their trial, based on the assumption of innocence guaranteed in the United States Constitution. However, a judge will have the power to determine whether a person should be released based on a public safety evaluation rather than the size of the defendant’s wallet.

From Snopes, in regards to this topic ~ https://www.snopes.com/fact-check/illinois-safe-t-act-non-detainable-crime/