After police encrypted, MOTOROLA
(supplier of the encrypted radio systems)
Donated some money towards Sheriff Caruana’s election campaign.
Now, there is nothing illegal about that.
However it does raise several red flags. Below you can clearly see the Rockford PD excuses for encrypting below, on WIFR.
We filed FOIA requests, and found out that ALL of their reasoning for police encryption,
are based on LIES

Police clearly lied to the community about their reasoning for encryption.

All those years of un-encryption, seems pretty SAFE for the officers…

37 Years without an officer killed in the line of duty in Winnebago County,  WHILE UN-ENCRYPTED

AFTER ENCRYPTING since 2015: (Within the last 7 years)

5 incidents, in 7 years AFTER ENCRYPTION… That we know about.

Please explain how police encryption is for “OFFICER SAFETY”
When the violence against police officers in Winnebago County has greatly increased,
AFTER ENCRYPTING

Police said that criminal can listen in, and get away.

How do police know criminals listen to police scanners, if “criminals get away”?

Again, the FOIA returned and said “No such records exists”

Police said that information heard over the airwaves,
could be used for nefarious reasons.

Again, the FOIA returned and said “No such records exists”

We not only filed these requests with Rockford,
But with several police departments in Winnebago County.
Just to see if it was isolated to Rockford.

ALL the FOIA requests from all the police departments we filed a FOIA with,
said “No such records exists”

Instead of posting all of them, I will just post this one from Rockton PD.
I used Rockton PD response, because I wanted to show a smaller police department.
To show, that regardless of how big or small a department is,
ALL POLICE DEPARTMENTS IN WINNEBAGO COUNTY,
LIED ABOUT THEIR REASONING FOR POLICE ENCRYPTION. 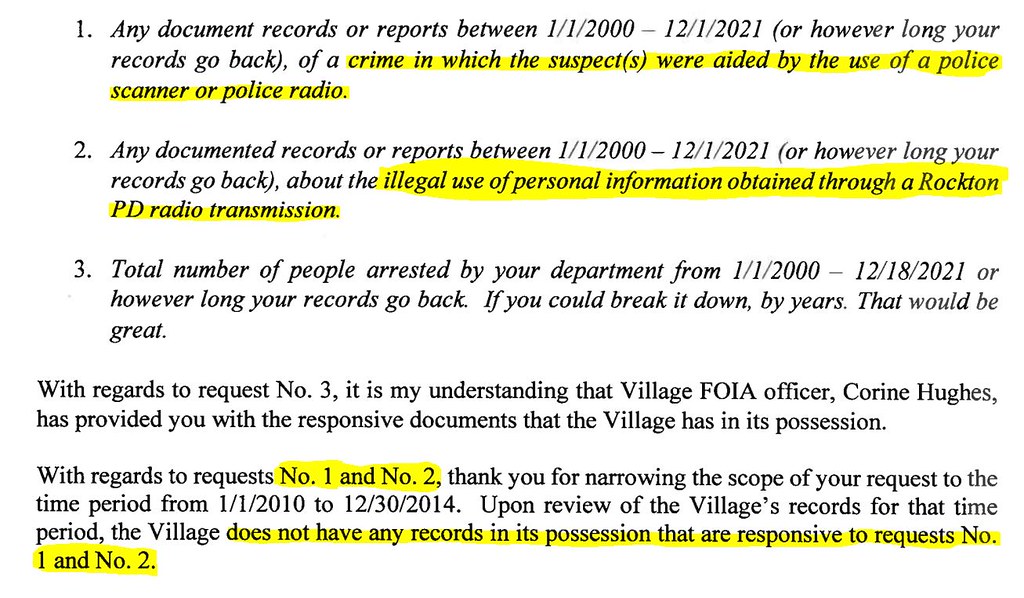 The community was able to listen in and be able to assist police, in capturing criminals.
If they knew about a suspect, and saw them. They would call the police to relay the suspects location.
And the suspects would be arrested…

We filed a FOIA on the total number of arrests, per year. After police encrypted, these are local 1st responders actions towards the public

Rockford Scanner™: Sources Are Reporting A Robbery/Burglary At A Local Business

Click Here To Read More »Rockford Scanner™: Sources Are Reporting A Robbery/Burglary At A Local Business

Rockford Scanner™: Sources are reporting an accident with multiple injuries.