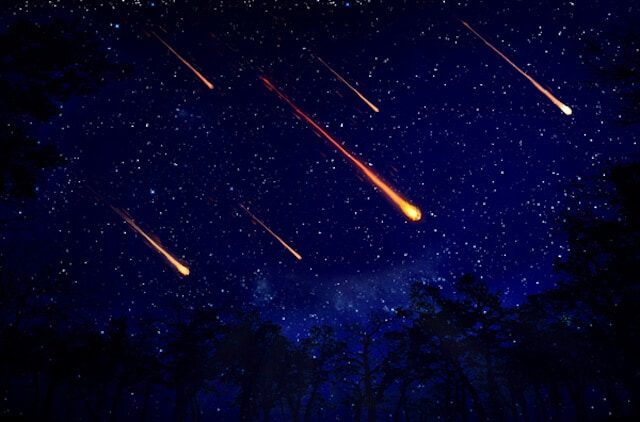 The other night I was driving and saw a bright meteor fly across the sky.

It was one of the most brighter meteors I have saw in recent times.

I did some research, and found out that the Orionid Meteor Shower Peaks This Week!

Orionid meteors fly each year between about October 2 to November 7. That’s when Earth is passing through the stream of debris left behind by Comet Halley, the parent comet of the Orionid shower. The Orionids usually put out the greatest number of meteors in the few hours before dawn. And the expected peak morning in 2021 is October 21. Bad news for Orionid fans this year, though. The 2021 full Hunter’s Moon will be October 19-20. That means moonlight will flood the sky all night, or nearly all night, during the Orionids’ peak.

From a dark location, in a year when the moon is out of the way, you might see 10 to 20 Orionids per hour at their peak. Will you see that many in 2021? Not likely. There’s always the element of uncertainty and possible surprise when it comes to meteor showers. But no one expects that many Orionids to overcome the moon’s glare during 2021’s shower.

If you do see any Orionids in 2021, note that they’re known to be extremely fast meteors, plummeting into the Earth’s atmosphere at about 41 miles (66 km) per second. The meteors in this shower are on the faint side. But they make up for their faintness by leaving trains, or ionized gas trails that last for a few seconds after the meteor itself has gone. Maybe half of the Orionid meteors leave persistent trains.

Also, sometimes, an Orionid meteor can be exceptionally bright and break up into fragments.

The radiant point for the Orionids is in the direction of the famous constellation Orion the Hunter, which you’ll find ascending in the east in the hours after midnight during October. Hence the name Orionids

Bottom line: In 2021, the Orionid meteor shower is expected to rain down its greatest number of meteors on the morning of October 21. But the moon, just past full, will interfere.

Click Here To Read More »Rockford Scanner™: Vehicle Crashes Into A Tree, On The West Side
previousEmergency Personnel Responding To A Fire At A local Marijuana Cultivator Business
nextRockford Police officers will be equipped with Body-Worn Cameras on Monday, October 25th