Rockford Scanner: Space-X Is About To Splashdown

WATCH IT LIVE AT ~ https://www.youtube.com/watch?v=pHcJXGI5yo0

SpaceX’s Crew Dragon spacecraft — carrying NASA astronauts Robert Behnken and Douglas Hurley — is slowly maneuvering closer to Earth and preparing for a splashdown later today in the Gulf of Mexico.

The spacecraft is expected to touch down off the coast of Pensacola, Florida, on Sunday at 2:48 pm ET. Behnken and Hurley’s safe homecoming will mark the end to an historic two-month mission and pave the way for the US to once again become a world leader in human spaceflight.
The astronauts have been aboard the Crew Dragon spacecraft, named Dragon Endeavour, since Saturday evening when it undocked from the International Space Station.
Behnken and Hurley began their historic two-month trip to the ISS in May, when the astronauts launched inside their Crew Dragon spacecraft from a ground pad in Florida. It was the first NASA astronaut launch from US soil since 2011 and the first time in history that a commercially developed spacecraft carried humans into orbit.
Overnight, the vehicle conducted a series of engine burns to lower the vehicle’s altitude, preparing to take a dramatic plunge back into the Earth’s thick atmosphere later today. 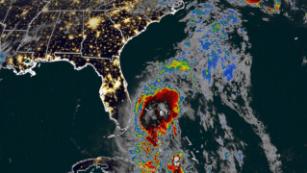 Florida feels first rain and winds of Tropical Storm Isaias
Adding to the drama is Tropical Storm Isaias, which is barreling toward Florida’s east coast and threatening violent winds capable of damaging roofs and buildings.
NASA and SpaceX predetermined seven potential splashdown sites for this mission, four of which are to the west of Florida in the Gulf of Mexico: Pensacola, Tampa, Tallahassee and Panama City. And in that area, the wind and wave heights appear calm enough for the Crew Dragon to land safely.
Still, weather officials are keeping a close eye on the forecast, and they could call off the splashdown all the way up until the spacecraft begins reentering the Earth’s atmosphere.
Behnken and Hurley — both married to fellow NASA astronauts —have young families waiting at home for them. Their sons dispatched a wake-up message for the astronauts this morning.
“Rise and shine daddy, we love you! We can’t wait to see you — wake up, wake up! …Don’t worry, you can sleep in tomorrow. Hurry home so we can go get my dog,” one of the children said.

Rockford Scanner ™: Car Runs Into Barrier On I-90

Sources are reporting a automobile has…

Click Here To Read More »Rockford Scanner ™: Car Runs Into Barrier On I-90

Sources are reporting a automobile accident with…

Sources are reporting a house fire in…

Sources are reporting an auto accident with injuries…

Sources are reporting a automobile accident that…