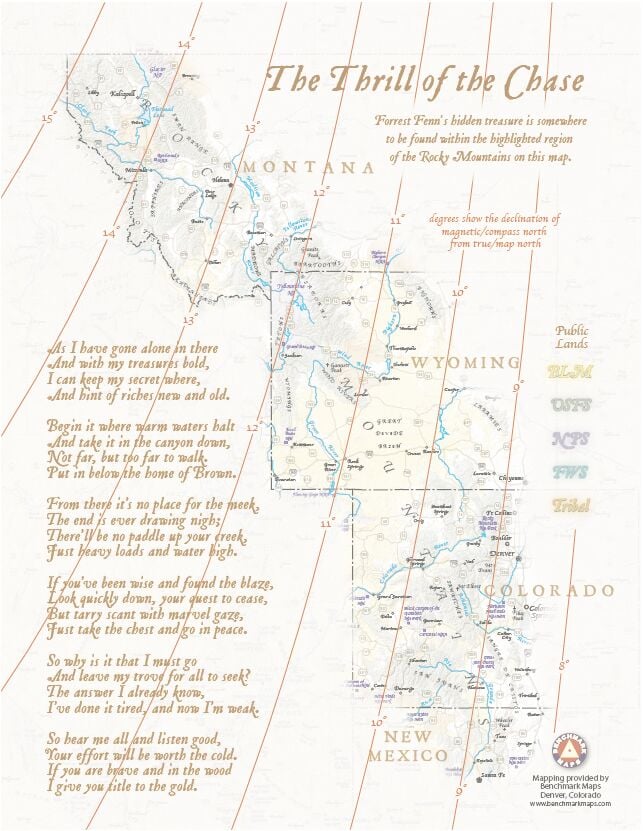 The search for treasure might be over, but the fight sure isn’t.

“It’s true,” Fenn told The New Mexican in a phone call Sunday, adding that the finder of his chest located the valuable goods “a few days ago.”

Fenn wouldn’t say where the treasure was found or who found it.

“The guy who found it does not want his name mentioned. He’s from back East,” he said, adding that it was confirmed from a photograph the man sent him.

An estimated 350,000 people have hunted for Fenn’s treasure. Some quit their jobs to do so. But it’s had deadly consequences. At least five people have died while searching for the chest.

Barbara Andersen, a Chicago real estate attorney, said she is filing an injunction in federal District Court alleging she solved the puzzle but was hacked by someone she doesn’t know.

“He stole my solve,” she said in an interview. “He followed and cheated me to get the chest.”

Andersen, who has been licensed to practice law in Illinois since 1998, is representing herself.

In the injunction, she seeks to stop an unknown defendant from selling booty from the treasure chest. She is also asking the court to give the chest to her.

And that’s not the only court case involving Fenn’s treasure.

In December, David Harold Hanson of Colorado Springs, Colo., sued Fenn for $1.5 million, claiming he has deprived him of the treasure through fraudulent statements and misleading clues.

A judge threw out the case in February, citing mishandled procedure for serving Fenn with the lawsuit. But last week Hanson petitioned the court to reopen the case.

One treasure hunter taking Fenn to court was skeptical of the timing.

Brian Erskine of Prescott, Ariz., said in his complaint, filed in U.S. District Court, that he “solved the quest.”

Erskine said the site in question is in the San Juan Mountains of Colorado, between the towns of Silverton and Ouray and accessible by U.S. 550, also known as the “Million Dollar Highway.”

“He just got served with my lawsuit, and now we have this press release,” he said in an interview Sunday.

Among other arguments for his case, Erskine says abandoning a chest of valuables in the wild, as Fenn says he has done, means he couldn’t “give title” as Fenn writes in his memoir, The Thrill of the Chase.

And still others believe the treasure never existed — or had already been given away.

“I think his announcement is at least a few years, and a few lives, too late. But he has to live with that. I believe this was over much earlier than today,” said treasure hunter Seth Wallack.

“I think 2019 is the year he said was his last to do any interviews about the treasure, which I interpret as he lost interest because the hunt was no longer,” Wallack added. “In 2020, he said the treasure was found, but doesn’t reveal any details so his narrative can’t be questioned.”

Saying he wanted others to take part in an old-fashioned adventure, Fenn published clues online and in a 24-line poem published in his memoir.

In 2017, he told The New Mexican the chest weighs 20 pounds and its contents weigh another 22 pounds. He said he delivered the chest to its hiding place over two trips, by himself.

Asked how he felt Sunday, Fenn said it’s been quite the decade.

previousRockford Scanner: Several officers working a scene in Machesney Park
nextWCSO Releases Information On The Incident At The Jail On June 2nd

Accident With Multiple Injuries in Rockford