Is the end near for Mars Odyssey? 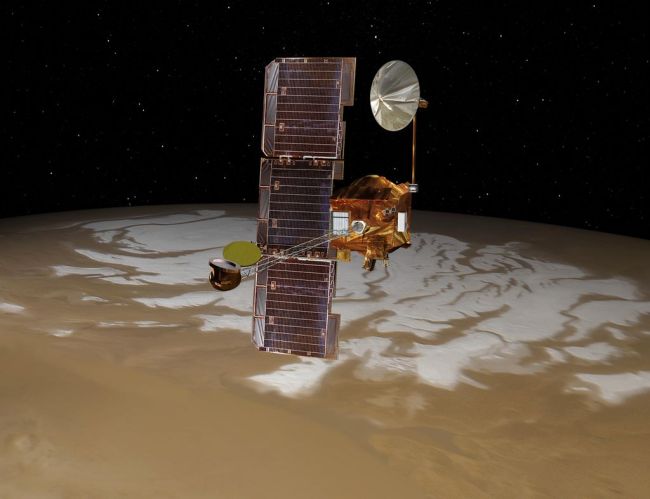 (Space.com) Is the end near for Mars Odyssey? Trump’s proposed 2021 budget could doom long-lived mission

NASA’s longest-running Mars mission may be on the chopping block.

While President Donald Trump’s 2021 budget request clearly threatened NASA missions like the jet-borne telescope SOFIA, another potential shutdown was tucked inside the request. Proposed cuts to the 2001 Mars Odyssey program would bring its budget to a scant million dollars a year, effectively terminating the mission. The budget request is just that, a request; Congress makes the ultimate decision about budgets and can choose to continue funding the mission. Nevertheless, the threat has Mars scientists anxious about the mission’s future.

“I can’t think of any situation where you would say, OK, let’s just turn it off,” said Tanya Harrison, an imaging scientist at Planet Labs who previously studied Mars and has relied on Odyssey observations. “You never know what you’re going to find if you keep going with these missions.”

Odyssey launched in April 2001, arriving in orbit around the Red Planet six months later. Within a year of its launch, the spacecraft found water ice beneath the ground, the first direct evidence of subsurface water on the Red Planet. Since then, the spacecraft has made a number of important discoveries and observations, including the longest continuous observations of Martian weather.

The proposed defunding is even more puzzling, the scientists said, because the spacecraft is in relatively good health and has enough fuel to last up to a decade longer. “Something else [on the spacecraft] will die before we run out of fuel,” Christensen predicted.

True, a series of strong solar flares put one instrument out of commission in 2003. And the spacecraft lost one of its reaction wheels in 2012, though its existing three are sufficient to point Odyssey in the right direction. But despite approaching its second decade, the spacecraft appears to have a bright scientific future in store — assuming it survives the 2021 budget proposal.

The concerns all stem from Trump’s budget request, a document the executive branch sends Congress to start the annual budget process. The request outlined presidential priorities and how the administration would like money to be allocated for the fiscal year beginning in October.

That request highlighted the proposed cancellation of the SOFIA and WFIRST space telescopes, the latter of which previous requests have also targeted. In contrast, Odyssey’s changes were tucked away in hundreds of pages of documents. There, a chart cuts Odyssey’s budget from $11.5 million in 2019 to $1 million in 2021 and no funding in later years (fiscal year 2020 is only partially enacted at this point and so is not listed). No explanation for it is given.

It’s easy to shrug off the long-lived mission, which has already received eight mission extensions. But when it comes to spacecraft, a functioning mission is worth more than might be expected. A colleague once told Christensen that a pile of parts is worth a certain amount value, which increases when the parts are assembled and again when a spacecraft survives the rugged testing required of space-faring machinery. But once the spacecraft is functioning at Mars, the value is without measure.

“When it’s in orbit and has proven itself for 20 years, it’s literally a priceless resource,” Christensen said. “Why would you turn off something that’s already there and working and doing a great job?”

Money is most likely the motivating factor. The NASA budget tends to be a zero-sum game, with few overall increases. And the agency wants to beef up a program to bring samples home from Mars, which generally requires moving money from another NASA column in the budget request. That’s what Christensen suspects is happening.

Odyssey isn’t the only Mars mission facing a requested budget reduction. The 2021 budget also proposes cutting the Curiosity rover’s funds by about 25%, a substantial hit for the brave little rover. Christensen suspects that the $10 million cut from Odyssey and $10 million from Curiosity has all been applied to a sample return mission. At the same time, the Mars Future Mission program request jumped by nearly $200 million in 2021 alone, with funding forecast to increase further over the next five years.

But to Christensen, it doesn’t make sense to scrap Odyssey to make that happen. “Sample return is going to be a multibillion-dollar endeavor,” he said. “In the big picture, saving $10 million isn’t really that important.”

Bringing rocks back from Mars is something Mars scientists have long fought for. Coincidentally, Christensen said he’s spent many years advocating for sample return because he thinks it’s important. And he’s sure that shutting down Odyssey isn’t something that NASA administrators are undertaking lightly.

“They’ve got some tough decisions to make,” he said.

A rock and a hard place

NASA has struggled through proposed budget cuts in the past that failed to kill their missions. The SOFIA “telescope on a plane” mission has lost funding in presidential budget requests several times over the past few years, yet it’s still flying.

But if Congress goes along with the Odyssey cancellation, the process will be long and complicated. The Odyssey mission control room sits not at a NASA center but at Lockheed Martin’s Colorado office.

A spacecraft can’t just be turned off, especially not one orbiting a world with potentially habitable environments, like Mars. Exactly how Lockheed Martin would decommission Odyssey has not yet been disclosed. According to a member of the Odyssey team who wished to remain anonymous, NASA has declined to acknowledge the proposed budget cut to the team or take steps to decommission the spacecraft, according to team members.

NASA did not respond to requests from this reporter for the decommissioning plan and postponed interview requests, At NASA’s request, Lockheed Martin canceled a scheduled interview to discuss the subject, leaving not only the Odyssey team but also the public in the dark.

In January, NASA and Lockheed Martin shut down the Spitzer Space Telescope, an infrared instrument orbiting the sun behind Earth. That decommissioning took roughly six months of coordination between the two organizations. “It’s not a trivial process to decommission a spacecraft,” Christensen said.

To close its mission by October 2020, when the proposed 2021 budget goes into effect, the spacecraft would likely have to begin its decommissioning program about six months earlier. If the budget hasn’t been sorted out by May 1, 2020, the Lockheed Martin team may find itself between a rock and a hard place.

One option is to continue operating the spacecraft as normal, fingers crossed tightly for a budgetary rescue. If Congress stands by the spacecraft, the mission will continue into its second decade and hopefully beyond that. But otherwise, the private company may find itself scrambling at the last minute to rush the decommissioning process, potentially causing entirely new problems.

The other, more likely option according to the confidential source is that the company will balk at the potential funding loss and begin the shutdown process. (Without comment from NASA or Lockheed Martin, it’s unknown what other steps would be required to decommission the spacecraft.)

Both Christensen and the anonymous source said that they’ve heard rumors that Odyssey would dump its fuel at some point between May and October. Christensen speculated that could be a step to prevent potential explosions in the future, which would litter the Martian atmosphere with thousands of pieces of debris.

Once the spacecraft has dumped its fuel, even an increased budget wouldn’t save Odyssey. Without fuel, the spacecraft won’t be able to point or transmit. If unchanged, its current orbit should keep it drifting around Mars for another 30 years, per the guidelines that prevent a spacecraft from impacting a planet within 50 years of leaving Earth.

Read the full story at https://www.space.com/mars-odyssey-nasa-2021-budget-request-cut.html

previousWinnebago County Sheriff Is Looking For The Following Individuals
nextWEATHER: This Weeks Forecast

Rockford Scanner™: Possible Fatal Scene On The West Side

Sources are reporting a scene on the…

Sources are reporting a home invasion in…

Sources are reporting a possible shooting.  It…

Sources are reporting a bad automobile…